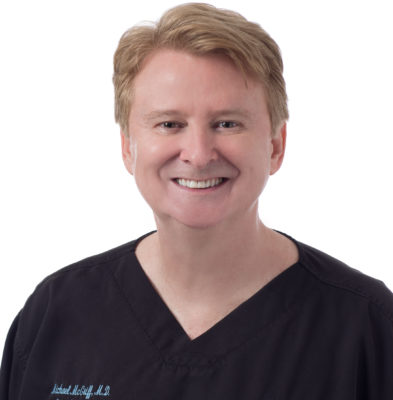 Dr. McGriff is a highly regarded Dermatology Surgeon who received his undergraduate degree from the University of Oregon, while also competing in long distance track and cross country races.  He obtained his medical education on an Air Force medical student scholarship, then Aerospace Medicine, General Surgery and Plastic Surgery residency training in Air Force hospitals and later at Pacific Surgical Institute and Cosmetic Surgery International training programs.  He also obtained his Orthopedic Trauma Surgery training at the busiest trauma center in California, located in Sacramento, under the direct guidance of the famous Michael W. Chapman, M.D., who authored the definitive Orthopedic Surgery textbooks known as “Chapman’s Orthopedics.”

Dr. McGriff served proudly in the US Air Force, flying mostly in F-15 fighter aircraft during Operation Desert Storm and Operation Provide Comfort, while also serving as the Chief Physician at Air Force hospitals.  He was also stationed in Germany, Italy and France, practiced medicine in Hawaii prior to permanently moving to Florida in 2019.  During his 27 year surgical career, he has continued serving the military population at Tripler Army Medical Center, caring for the badly injured soldiers and wounded warriors, while helping to develop the today’s integrated disability evaluation system to assist these wounded warriors in obtaining proper care and compensation for their injuries.

As a patient of ours, you’ll have a close, personal relationship with your community dermatology providers, who have the training, experience, and expertise necessary to meet all your skincare needs, whether you need relief from a medical condition or are looking into cosmetic dermatology.